Phoenix PC Networking was commissioned by Central Arizona Dental Society Foundation to develop an integrated digital system for patient enrollment, record keeping and x-ray capture for a charity dental event for the underprivileged. This event is known as Arizona Dental Mission of Mercy or AZMOM, https://azmom.org/ and is held every December. This year’s event had more than 100 dental stations and was working on a very small budget. The sponsors also had limited time for setup at the venue which included several acres of operation.

Phoenix PC Networking’s solution involved having an intranet based application written for patient data enrollment and x-ray developed that could be accessed over a light weight network such as Wi-Fi. The solution also allowed the dentists, hygienists and volunteers to use their own laptops and tablets on the internet while using this new intranet. They were able to access the data being created for the more than 2000 underserved patients while using a browser over https for secure communications.

Volunteers in the check in area used low cost dumb terminals that were purchased from surplus wholesalers and re-imaged with Linux software. Firefox was the default application that auto booted into a webpage of the intranet so there was easy access for patient data entry in the newly designed application. After the patient was entered all other volunteers, dentists and hygienists could access this patient’s chart. The patient could then be easily routed thru the stations and receive the necessary treatment and x-rays. The routing and treatment areas used all in one units with Linux and build in Wi-Fi to from 12 different access points throughout the 4 acre operation area.

X-rays were acquired from 4 different brands of panoramic and inter-oral digital dental x-ray machines and then imported into the intranet as jpegs which allowed access across the venue for doctors to view and analyze for treatment plans.

The success of Phoenix PC Networking’s solution at this event has ensured the success of this 2 day event for years to come and will be leveraged in other states for their dental Mission of Mercy programs.

Fulcrum is a leading consulting firm in the construction industry for lenders and investors with employees located in remote offices throughout United States.

They faced a major challenge of needing to consolidate their IT operations costs, they had users accessing databases of large graphic files on local servers at remote offices. The annual maintenance cost of equipment and maintenance of all the servers was staggering.

We recommended the Citrix VDI for a variety of reasons, one was so that the databases of all their offices were consolidated to the main office on one server, eliminating the need for local servers at remote offices. The Citrix robust fresh rate over WAN allowed users to access the same data as before but with no lag even though data was hundreds and sometimes thousands of miles away.

Second benefit to implementing the VDI solution was drastically removing maintenance costs at remote offices of various workstations, as their roles were less critical and now acted as dumb terminals.

The Phoenix Endodontic Group had a mixed environment of Dell thin clients and traditional desktops.The devices connected to Citrix VDI environment with Windows 7 operating capabilities. The practice found that their current Dell thin clients were not properly redirecting USB image sensors to the patients’ dental electronic medical records and needed a solution. Additionally, the Phoenix Endodontic Group found inconsistencies and technical problems similar to the issues they were facing with their Dell thin client devices with their traditional desktop units located in their front desk and administrative areas. These errors often occurred with USB based devices, scanners, and cameras.

They purchased 10 Acer Veriton N2010G units running with DeTOS a Linux based thin client
OS. They also re-imaged four of their Dell PC’s using Devon IT’s VDI Blaster software.
The purchase of the 10 thin clients was used to solve the USB redirect challenge, and to
allow the practice’s USB image sensors to communicate wirelessly with electronic patient
medical records. This communication enabled the staff to pull patient images, send
snapshots of images in real time, and maintain the records.

Read the full article from Devon IT in which they published about this case study.

Pinnacle group is an executive search agency who faced challenge of needing expanding servers due to database upgrade, we offered a Microsoft Hypervisor solution. The resulting outcome was we consolidated 4 server roles onto 1 Microsoft hypervisor server, client noticed of increased speed of applications once running on hypervisor.

Second challenge was with aging desktops, new applications were not compatable with Windows 7 upgrade, so we converted existing pcs to dumb terminals. Installed windows 7 in hypervisor server and used the convert pc to dumb terminals to use citrix xendesktop client to access the windows 7 desktops.

Transtar is an Insurance agency for trucking industry with employees located throughout United States, they faced challenge of needing a remote access solution where users could securely access internal applications and data which not requiring any data back-up locally.

We installed Citrix Zen desktop solution which delivered a full desktop session to remote users who have expressed that the sensation seems as if they are working in same office due speed and agility of the application performance.

To complement solution client uses Vocalocity phone service so that all users can communicate internally, transfer, answer calls without any complicated set-up or expense.

We set-up a Citrix Zen desktop solution using apple iPads to access virtual desktops of windows7 which had access to network shared folders with service manuals. While accessing the virtual desktops with QuickBooks, services tech can create invoices and email out using iPad.

The challenge was the high cost of desktop upgrades, due to software (Cornerstone Veterinary software) upgrade. The client was needing to upgrade desktops to more powerful versions as vender software required PC’s with more memory and faster processors.

We provided a solution of using Microsoft Hypervisor and consolidated 3 physical servers onto one single server and added 12 virtual desktops using Citrix VDI for delivery of desktop experience.

Pinnacle Group
“We have always had a room dedicated to all servers and equipment and now with whole environment virtualized in one server it sits in a closet”. “Terminal server has always been are method of connecting for remote users, but it lacked sound and video quality.

With the Citrix VDI we can listen to Voice-mail messages from our phone service provider in outlook and all Internet browsers as if the desktop was local”
- Brant Moxley, Managing Partner
Transtar Insurance
"The flexibility of connecting from anything feature of Citrix Zen desktop has allowed us to hire employees whom work from home and we can get them connected immediately regardless of what software operating system they use or platform version."

Plotter Doctors
"The ability to access the office from iPads has allowed your service techs to access the library of service manuals from your network making us more efficient and effective."

Tony & Sons Insurance
To me, switching my business to a cloud-based virtual private network has completely changed our day to day lives... couldn't live without it!
- Antonio, Manager 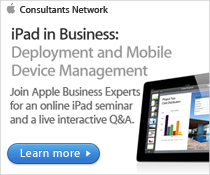 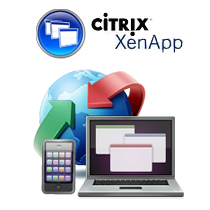 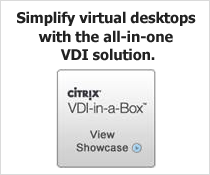